The Globe and Mail: Where’s the C-suite in an open, hybrid office? 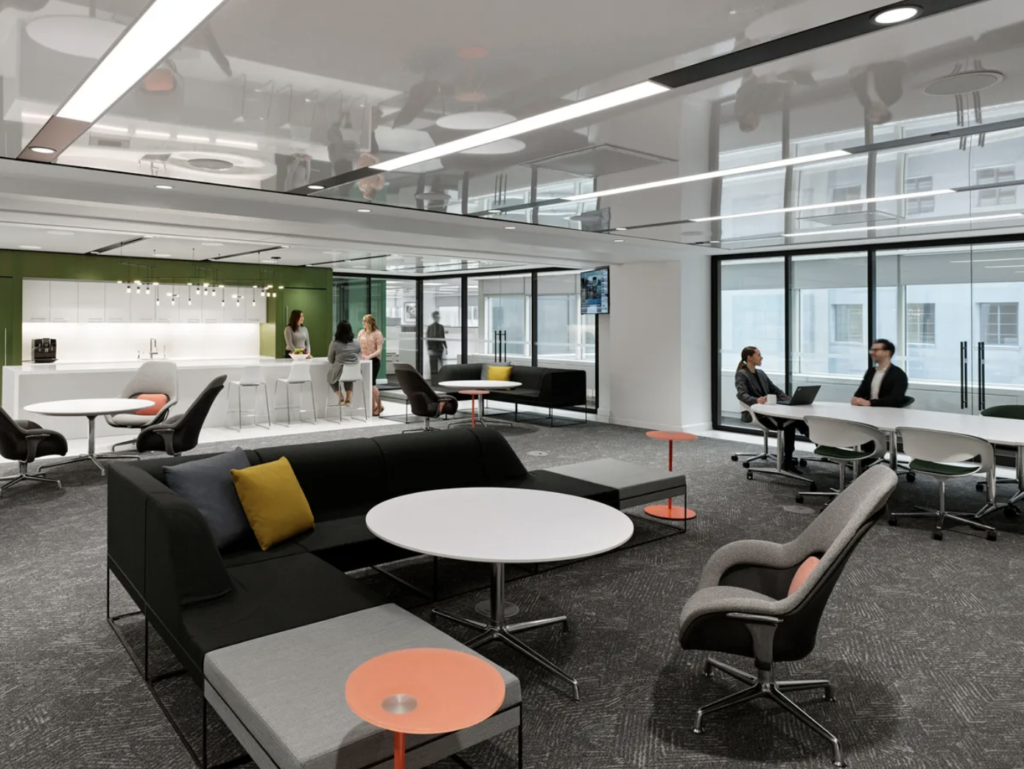 They didn’t call it the C-suite for nothing. Traditionally, the perks that came with an executive position included expansive and exclusive real estate. But as the pandemic is proving that we don’t need to rely on the physical workplace, the corner office is becoming an anachronism, trend-watchers say.

“Particularly in larger organizations, the idea of having a separate executive zone is becoming a thing of the past,” says Matthew Kobylar, design director of Gensler Toronto. The trending shift toward open offices had started even before the pandemic, “but it’s being reinforced in the hybrid workplace as people are realizing that when they come to the office, they want to see and interact with each other, including the management team.”

That has organizations repurposing corner offices as collaboration zones and repositioning managers for more visibility. “There is a shift to giving employees more physical space. We’re seeing some companies spending more on amenities to give people reasons to come into the office. Where they used to have just a grab-and-go coffee station on a floor, they’re saying, let’s make that bigger and more like your kitchen at home and have an island in the middle where you can sit and have spontaneous conversations,” Mr. Kobylar says.

“I’m seeing design models now where offices are all open: no cubicles or desks, just sofas and kitchen-table style furniture. You come in the office and collaborate with your team and then you can go home and do your heads-down work”

As an example, Gensler is redesigning a Toronto office for one of Canada’s big banks. “Nobody has an office, including the C-Suite. The executive group is situated in the centre of the office floor to be accessible,” he notes. “To give themselves a little privacy, they sandwiched themselves onto the floor plate between two collaboration areas. That provides a buffer and acoustic privacy and gives them quick access to those rooms for meetings.”

For Manulife’s corporate head office in Toronto, Gensler reconfigured the executive floor to create a central hub with a vertical retracting wall, allowing expansion or reduction of space. The executives work in an open plan with small meeting tables nearby for impromptu chats and enclosed spaces at the core for more private meetings.

The hybrid office phenomenon is happening around the world; a McKinsey & Company survey of 100 executives across industries and geographies found nine out of 10 organizations will be combining remote and on-site working in the future. Most of the executives surveyed expect that for non-essential roles, employees will be on site no more than four days per week.

And a survey of 340 Canadian organizations by total rewards consultants Normandin Beaudry found 91 per cent have now adopted a formal telework policy or plan to do so, compared to only 26 per cent prepandemic. The majority of these organizations are planning for a maximum of two or three days of telework per week.

Smaller organizations (with fewer than 200 employees) are more flexible, the survey found, and companies that will require employees to be physically present are mainly in manufacturing.

To be an effective leader in a hybrid world, isolating in a closed office is no longer viable, says Manny Campione, Normandin Beaudry’s market leader and principal, compensation and performance.

“During the pandemic and in a postpandemic era, managers need to be more accessible, available and visible – in person and virtually – because employees, especially new hires, are looking for that level of support now more than ever before. If you believe in the concept of a leader as a coach, managers will regularly engage with their teams – formally and informally – and provide continuous performance and development feedback.”

In December, Normandin Beaudry relocated its Toronto team into a new office that originally had private offices for senior leaders, but those spaces have been repurposed into meeting areas. “We made the decision to have all employees sitting in an open-office concept, of course with the necessary social distancing requirements,” Mr. Campione says.

The original office boardroom is often used by members of the team to work in and host meetings; there is also a lunchroom where the team can gather and have discussions.

Mr. Campione is finding, as a manager, that the proximity to employees – especially in a growing professional services firm – is more conducive to group dialogue and collaboration.

“Before the move, the Toronto team was in a space that had traditional enclosed offices along a corridor,” he explains. “In the new office, we find that it is much easier to connect and foster a sense of belonging and community.”

However, while there is a lot of discussion and experimentation, the future of executive space in the hybrid office is still in flux, says Les Miller, chief executive officer of Crown Realty Partners in Toronto. “What I’m hearing from companies is they want to use their space more for the social interaction that’s required for collaboration rather than as just a workspace.

“I’m seeing design models now where offices are all open: no cubicles or desks, just sofas and kitchen-table style furniture. You come in the office and collaborate with your team and then you can go home and do your heads-down work.”

The office may become a place where people gather for team meetings and for onboarding, and on the days you just want to work on your project, you work remotely. And that will dictate the designs of the hybrid office and where managers work most effectively, Mr. Miller says.

“I think companies will do pilots of what they think will work and it will evolve. There’s a lot of discussion and experimentation going on, but I haven’t run into one company that says, ‘Okay, we’ve got a plan, and this is the design we’re going to go with long term.’”

How managing a hybrid office plays out will also depend on office culture because “a reality is that while most executives won’t admit it, they still covet a corner office,” notes Corrado Russo, senior managing director at Hazelview Investments in Toronto.

“The challenge is every management style is different and some managers want to be right in the centre of a long trading desk and hear all the chatter, and there are others who still want an office – whether it’s in the corner or on a window – where they can have an open door for employees to come in and have a private chat,” Mr. Russo says.

“I don’t you think you can completely do away with closed offices. There are still many conversations that need to go on in private, particularly with senior management.”