A cluster of office towers along Jasper Avenue was the commercial heart of Edmonton for a quarter of a century. But things have changed recently as new office towers are sprouting around Rogers Place, a few blocks to the north.

When major tenants moved to the newer buildings offering more amenities, some older Class A buildings ended up nearly vacant. In the core, vacancy rates were over 13 per cent before the pandemic and they now stand at around 18 per cent, with older A class buildings as high as 21 per cent.

“As available space increases, we’re going to see landlords getting much more competitive to offer compelling rate structures but also investing in their buildings and lobbies.”

“We’re seeing a flight to quality, to new products that have state-of-the-art HVAC and mechanical systems, larger floor plates and offer lifestyle and amenity-rich environments and social hubs,” says Mark Hartum, principal with Avison Young in Edmonton. To stay competitive, landlords of older buildings are heavily investing in renovations that add collaborative space.

Flight to quality has gained momentum in cities across Canada in the wake of the pandemic, as tenants want amenities that attract workers accustomed to working from home back to the office, says Jon Ramscar, CBRE national managing director based in Toronto.

With vacancy rates at historic lows prepandemic, he says, landlords had less incentive to make investments in fully leased buildings.

“But as available space increases, we’re going to see landlords getting much more competitive to offer compelling rate structures but also investing in their buildings and lobbies,” he explains. 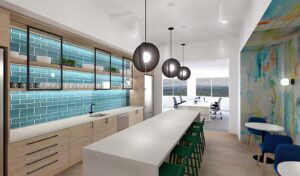 The kitchen at 2680 Skymark was built on spec by Crown. CROWN REALTY PARTNERS

“Ventilation and touch-free surfaces are big asks because of the pandemic and most quality buildings have upgraded their filtration and air handling and made access points and fixtures in washrooms touch-free in the past two years,” he says.

But now features as simple as coffee houses and bike-storage facilities for those who commute by bike have become significant differentiators as potential tenants consider an office move.

State-of-the-art technology is essential as tech companies are the drivers of office demand seeking out new Class A buildings across North America, he adds. That’s also increasing demand for buildings to consider environmental, social and governance factors to achieve net zero, which will have a huge impact on future investments.

“The market was so tight for space before the pandemic that everyone could lease space no matter what space you had,” says Scott Watson, managing partner, acquisitions and leasing for Crown Realty Partners, whose portfolio includes 70 office buildings in Toronto and Ottawa. “But today when vacancies are in the high teens in many markets, it’s way more challenging,”

With supply outstripping demand, even normally competitive Toronto is seeing double-digit vacancy rates, he says. “The average tenant looks at four spaces before they commit to an office building. And when you look at the financial core of Toronto, there’s a lot more than four buildings competing. It’s tougher to stand out, so you have to offer unique amenities to be attractive.”

Prebuilding suites is a way to get ahead of the curve, Mr. Watson says, as tenants want fully move-in-ready space. Crown has been building suites on spec in its buildings with efficient layouts and new finishes and app-enabled conference centres.

“We want our office experience to feel fresh and inviting from the moment you enter our building doors to the time you sit down at your workspace,” he adds.

In the past, Crown’s prebuilt suites were seldom larger than 3,000 square feet. But “recently we’ve been increasing those sizes; we have one in construction right now that’s a 21,000-square-foot full floor at a cost of about $1.2-million, in the hopes of attracting a tenant and competing with new spaces that are out there.”

Reinvestment in buildings to keep them competitive will be essential even as the office market recovers, Mr. Hartum says. “The alternative is to compete on price alone, which is not ideal [because] if landlords don’t achieve enough economic rent, the result will be less capital available to reinvest in the building and its systems.

“Long term, this is not a good solution, and forces tenants to shop around and continue to empty out these older buildings. That isn’t healthy for the market as a whole.”

Edmonton landlords have been inventive and invested in rebuilds that are attracting new tenants to vacated buildings, he notes. An example is the 22-storey 103 Street Centre near Jasper, built in 1980. It saw most of its space vacated when Enbridge decided to consolidate its offices in a new building.

To bounce back, AIMCo/Epic Investment Services did a rebuild of 103 Street Centre aimed at the growing tech community in Edmonton. The lobby and second floor were connected by a “social staircase,” with bleacher-like seating for people to sit and have conversations or work on a laptop, along with a flexible presentation space for more than 100 people on the main floor.

Other additions include a conference centre, meeting rooms, tenant lounges, a games room and a kitchen and dining area. It’s been so attractive to new tech clients that the vacancy rate plummeted from 95 per cent to just 22 per cent, “which is still high, but it really has been a substantial turnaround,” Mr. Hartum says.

In another building known as First and Jasper, managed by GWL Realty Advisors, Avison Young has been engaged to handle project management of the main floor of the 20-storey building on Jasper Avenue which housed retail tenants that were struggling.

The space was rebuilt into tenant-focused amenities, including a lobby refresh, fitness and wellness centre, conference and meeting centre, parcel storage and concierge desk, Mr. Hartum says. The building is also pet friendly, which isn’t common in Edmonton, he adds.

The intent is to continue adding new tenants similar to the tech companies that recently joined the building, including Google DeepMind which is opening its first AI research labs outside of Britain. 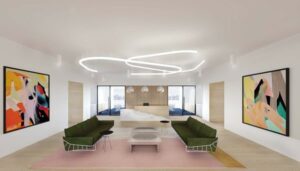 Crown has been building suites on spec in its buildings with efficient layouts and new finishes and app-enabled conference centres. CROWN REALTY PARTNERS 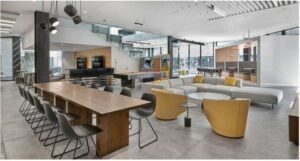 Edmonton landlords have been inventive and invested in rebuilds that are attracting new tenants to vacated buildings. MERLE PROSOFSKY ARCHITECTURAL PHOTOGRAPHY LTD

Leasing interest picked up significantly across Canada as lockdowns have ended, “but we’re still on hold waiting for a lot of large organizations to commit to their longer-term office plans, whether it be renewing leases, reducing their space needs or even increasing their footprint to accommodate new amenities for the employees or business expansion,” Mr. Ramscar says.

Tenants who may have put space up for sublease during the pandemic are now holding on to it waiting to see how quickly workers return to the office.

“Leasing activity is expected to increase throughout the remainder of the year as occupiers make decisions on their office space,” Mr. Ramscar says, “and we fully anticipate a continued focus on the flight to quality.”